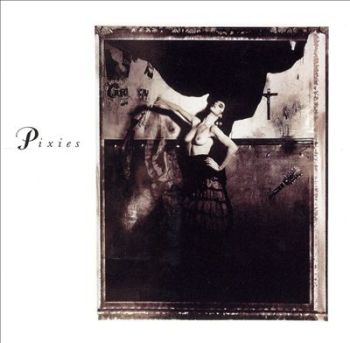 A Gigantic good record!
"A die-cast metal fossil of misplaced draft, with or without the fucking production. Everyone who has ever commented on Surfer Rosa has said that the production's amazing. I agree with that, but the songs are so strong that it wouldn't have mattered if you'd listened to it through a boom-box. I was completely nihilistic up until about four or five years ago, when I first heard this. It changed my attitude. It made me finally admit, after being into punk rock for so many years, that I finally liked other styles as well. It made me finally admit that I'm a music lover. Their music reminded me of the music that I always wanted to do - and was doing - before I got into punk rock eight or nine years ago."
—Kurt Cobain, who named Surfer Rosa his second favorite album of all time, after Raw Power by The Stooges. He later hired Steve Albini to produce In Utero for Nirvana.
Advertisement:

Surfer Rosa is the first full-length album by The Pixies, released in 1988, generally considered one of the all-time best (alternative) rock albums with fans such as Kurt Cobain, PJ Harvey and Billy Corgan of The Smashing Pumpkins. It was their second release with 4AD Records, the first being their EP Come On Pigrim. Despite being an American band, it was also their first release to have U.S. distribution, being issued in America by fellow indie label Rough Trade. The first CD edition on both sides of the Atlantic included Come On Pilgrim. Rough Trade also issued Come On Pilgrim on vinyl and cassette. After the collapse of Rough Trade in the early '90s, their American distributor at the time, Elektra Records, released both Surfer Rosa and Come On Pilgrim individually, the band having moved there for American distribution with Doolittle. U.S. releases have remained separate even after 4AD acquired the American rights to the band's 1987-1991 catalog. The album was eventually certified gold (sales of over 500,000 copies) by the RIAA in 2005.

The album is best known for the underground hits "Gigantic" and "Where Is My Mind?". The album was a hit on College Radio, leading to the band's American deal with Elektra.

And you'll ask yourself (while reading these tropes): "Where is my mind?"