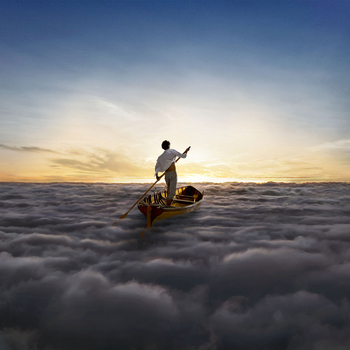 It's louder than words, this thing that we do.
Advertisement:

The Endless River is the fifteenth and final studio album by Pink Floyd, released in 10 November 2014. Their first album after twenty years and their first double-LP since The Wall nearly 40 years priornote modern-day vinyl reissues of The Division Bell also come in double-LP form, but this is more out of necessity than creative vision, as the sheer length of the strictly CD-oriented album makes it difficult to release uncut as a single LP, it is also the first after the deaths of both Richard Wright and the long-departed founding member Syd Barrett.

Most of the album is comprised of instrumentals, with only one song with lead vocals by David Gilmour. Much of the album is composed of out-takes from The Division Bell, and so features Wright posthumously. It was the first album since The Final Cut not to have a supporting tour, owing in part to the sense of finality that Gilmour and Mason wanted out of the record.

Compared to previous Pink Floyd albums, The Endless River is a far more ambient-oriented affair, with considerable focus on mood and texture than conventional melody (largely due to it consisting primarily of old instrumental outtakes). The broad majority of the album is purely instrumental, with the only lyrical song on it being the closing track, "Louder Than Words". Like most previous songs from the Gilmour-led incarnation of Pink Floyd, the lyrics for it were penned by Gilmour's wife, Polly Samson.

Preceded by The Division Bell.

CD and Blu-ray releases are on a single disc each

With world-weary grace, we've taken our places; we could curse it or nurse it or give it a trope...: