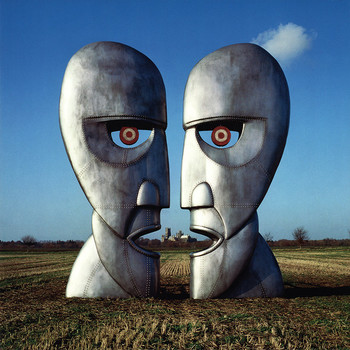 The Division Bell is the fourteenth studio album by Pink Floyd, released on 28 March 1994. It is their first album to officially feature the returned Richard Wright, who was a session musician for A Momentary Lapse of Reason. The album would also be the band's last to feature Richard Wright during his lifetime; he passed away of cancer in 2008, with The Endless River only featuring archival recordings of his. The band launched a successful stadium tour in support of the album, which would also turn out to be their last. A live album of the tour, featuring a complete performance of The Dark Side of the Moon, titled Pulse, was released on 5 June 1995.

The Division Bell was supported by five singles: "Keep Talking", "Lost for Words", "What Do You Want From Me", "Take It Back", and "High Hopes". A music video for "Marooned" was also released in 2014 for the album's 20th anniversary.

Preceded by A Momentary Lapse of Reason. Proceeded by The Endless River.

Tracklist:note Most original vinyl releases shortened some songs from the CD to fit the album on a single LP. All LP reissues since 2014 are double LPs with the song lengths unabridged.

"Beyond the horizon, in the place we troped when we were young":