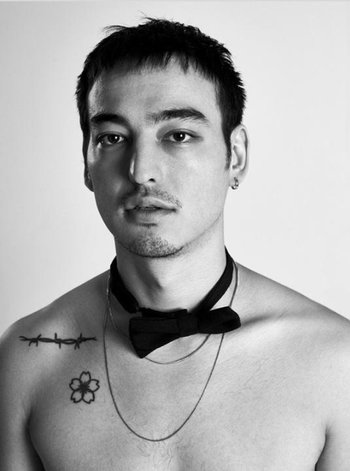 George Kusunoki Miller (b. September 18, 1992) is a Japanese-Australian singer-songwriter who creates music under the stage name Joji, and was formerly known as the mind behind Filthy Frank.

He started out as an independent entertainer, initially intending for Filthy Frank to give his music a platform — even creating the character of Pink Guy as an In-Universe musical outlet in the show. However, he had to make do with the show's popularity eclipsing his individual work, and would struggle between pursuing his own aspirations and pleasing fans for several more years.

The first creative era of Joji (2014-2016) exists as a number of lo-fi hip-hop and alternative R&B SoundCloud singles for the likely-never-to-be-released project Chloe Burbank, Vol. 1. Although he intended to keep the music a secret from his fanbase and released it under an alias, his association was leaked rather quickly.

The second era (2017-) began once he got onto the 88rising label, where he began collaborating with fellow artists such as Rich Brian and Lil Yachty and developing a more defined, evolved sound and voice to lean into his first official releases.

Around the same time, he announced that the Filthy Frank show was officially cancelled, citing intensifying health concerns and personal loss of interest, and Joji has been his main creative focus ever since.

Not to be confused with Joji Nakata or director George Miller.