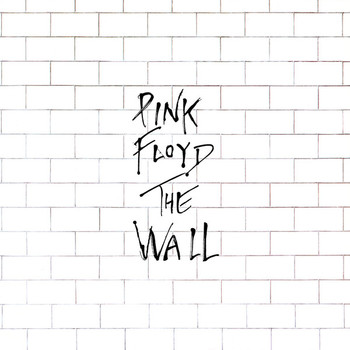 Is there anybody out there...?
"So ya thought ya might like to go to the show,
To feel the warm thrill of confusion, that space cadet glow.
Tell me, is something eluding you, sunshine?
Is this not what you expected to see?
If you wanna find out what's behind these cold eyes,
You'll just have to claw your way through this disguise!"
— "In the Flesh?"
Advertisement:

The Wall is the eleventh studio album by Pink Floyd, released in 1979. It is their last studio album to feature Pink Floyd as a quartet: keyboardist Richard Wright was fired during the making of this album, and while he officially returned by The Division Bell, bassist and de-facto bandleader Roger Waters had left as well in the interim. The theme of this album is similar to the one found in the band's earlier work The Dark Side of the Moon as it involved descent into insanity. The album also marked the start of the band's working relationship with Bob Ezrin, previously known for his work with artists such as Lou Reed, Alice Cooper, KISS, and Peter Gabriel; Ezrin would bring his bombastic sound to this album, building off of the punk-inspired Arena Rock sound that Pink Floyd had already developed on Animals.

The Wall follows a narrative about fictional rock star "Pink" and his rise and fall, which are caused by his deliberate isolation and his distancing himself from reality and human interaction. The character of "Pink" is based on both Roger Waters and Syd Barrett.

The Wall was heavily inspired by the Real Life trials and tribulations of Waters, who came up with the idea for the album after the last concert at Montreal, Canada's Olympic Stadium during the 1977 In the Flesh tour in support of the band's album Animals. During the concert he spat in the face of an unruly fan who was climbing the fence between the crowd and the band. The fan was overjoyed to be spat on. This event caused Waters to realise that he was starting to distance himself from others and that this "wall" was turning him into a cold and destructive person, and he jokingly suggested that the band build a wall between themselves and the fans.

The band's tour promoting the album featured giant puppets, Deranged Animation by political cartoonist Gerald Scarfe and most notably, a giant wall of cardboard bricks that was constructed between the musicians and the audience during the course of the first half of the show; a live album of their two performances at Earl's Court, titled Is There Anybody Out There? The Wall Live 1980–81, was released in 2000. While the stage show did manage to attract a quite sizable audience, it was so expensive and cost so much to put together that the tour only had 31 shows in four different cities (London, New York, Dortmund and Los Angeles); a revival tour by Roger Waters in 2010/2011 is still the most expensive concert tour of all time. A special one-off performance was staged in Berlin in 1990, on the no man's land space between Potsdamer Platz and the Brandenburg Gate, to commemorate the fall of the Berlin Wall.

The album was later adapted into a 1982 feature film entitled Pink Floyd – The Wall, directed by Alan Parker and featuring Irish musician Bob Geldof as Pink. It set the music and story of Pink to horrific scenes that shifted from live-action to the aforementioned animation by Scarfe. Most memorable were the animated scenes of marching hammers and nightmarish blitz-era London, as well as the film's stunning climax. Scarfe drew upon his bedridden childhood to come up with the grotesque imagery featured prominently in the concerts and film.

The album and movie share the same story, albeit with a few minor differences. The first half of the movie and album introduce us to Pink and his insanely crap-tastic childhood. Events and circumstances in his childhood life—an overbearing/overprotective mum, a father who died in World War II, and authoritarian teachers—cause him to shun human interaction because he's afraid he'll be hurt, every incident that causes him pain serving as just another brick in the "wall" that he is constructing between himself and the outside world. As an adult, Pink becomes a super-famous rock star and fills the "empty spaces" of his wall with the typical vices of the rich and famous: Sex, Drugs and Rock & Roll.

With us so far? Right.

After Pink finds out that his wife cheated on him, he trashes his hotel room and scares away a groupie before he finally snaps and completes his wall, shutting himself out entirely, and the album and movie take us inside the mind of Pink for the second half. After being revived from a drug coma and forcefully shot up with even more drugs by his managers to get him on-stage, he imagines that he has become the very same force that started his wall—Fascists (okay, "hammer army")—and begins to order the audience to hate on various minority groups. Eventually, he retreats further into his mind during a moment of brief clarity. Wondering if he's "been guilty all this time," Pink puts himself on trial with a literal giant arse as judge and warped visions of his childhood fears as jury, and forces himself to tear down his wall as a result.

The Wall was a major commercial success for Pink Floyd, topping the charts in the US, Australia, Austria, Canada, the Netherlands, Germany, New Zealand, Norway, Spain, and Sweden, and peaking at No. 3 on the UK Albums chart; the lead single "Another Brick in the Wall, Part 2" would also top the charts in the UK, the US, and Norway. It would go on to be certified double-diamond in Canada, diamond in France, platinum 23-fold in the US, platinum 14-fold in New Zealand, platinum 11-fold in Austria, quadruple-platinum in Italy and Germany, double-platinum in the UK, and platinum in Argentina, Brazil, Poland, and Spain. To this day, it remains the second-highest-selling album in the band's entire discography, bested only by The Dark Side of the Moon, and ranks among the biggest-selling albums in music history.

The Wall was supported by three singles: "Another Brick in the Wall, Part 2", "Run Like Hell", and "Comfortably Numb". The film adaptation, meanwhile, was supported by one single: "When the Tigers Broke Free", later added to The Final Cut in 2004.

Preceded by Animals. Proceeded by The Final Cut.

Hey you, don't tell me there's no tropes at all!

Goodbye all you Tropers, there's nothing you can say to make me change my mind. Goodbye.

Isn't this where—
Feedback

Example of:
Putting on the Reich