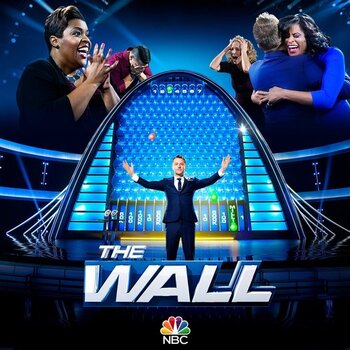 An NBC Game Show in which a couple play against a gigantic pachinko machine for a melodramatic chance at "life-changing" money. With Chris Hardwick, and LeBron James producing for some reason.
Advertisement:

The first round is a qualifier round called Free Fall; a couple is asked five questions with two answers each. On each question, three balls are released, and the players have until any ball falls past the top edge of a slot to lock in. If they answer correctly, the balls turn green and the amounts they hit (arranged Plinko style, with higher amounts near the middle and a $25,000 maximum) are added to the bank. If they're wrong, the balls go red and the amounts they hit are deducted. The only requirement is that the contestants must end the round with a at least $1 in their bank in order to continue in the game.

Starting with Season 4, the team can choose to double the total value of any one question by pressing a gold "Free Fall Plus" disk while the balls are falling.

At the start of the second round, one teammate is put in a Sound Proof Booth behind the Wall, and the "Super Drop", seven green balls, one from each tube, is released to add money to the bank. Three questions are then played, each with three multiple-choice answers. Before each question, the onstage player is shown the three possible answers, and can choose which of the seven tubes at the top of the board to use for launching a ball. Now, lower values are primarily near the left of the board, and higher values (maximum $250,000 in seasons 1-3, $150,000 in season 4) are near the right — so the player must choose a tube accordingly based on their confidence in the possible question under the presumption that the balls would likely fall into a slot near where it was dropped. Dropped balls turn green for a correct answer, or red for a miss. On the second and third questions, the onstage player can "Double Up" (play two balls) or "Triple Up" (play three balls), respectively. A negative Super Drop is played after the third question to reduce the bank.

The third round is played the same way, except that there are four green and four red balls at the start and end, with the contestant choosing which tubes to drop them from, four choices per question, and a maximum slot value of $1 million. After the third question, the isolated player is given a choice to accept a guaranteed payout (the Free Fall total, plus $20,000 per correct answer in the second and third rounds), or reject it in favor of the final bank total (which could be higher, lower, or even nothing). The decision is made by either signing or tearing up a contract sent into the booth via pneumatic tube. The isolated player then returns to the stage to reveal their decision and learn the number of correct answers, the payout, and the final bank total.

The Wall premiered as a special preview on December 19, 2016, before its official premiere on January 3, 2017. France's TF1 later premiered a daily version, which trims down almost all of the melodrama.

Not to be confused with anything to do with Pink Floyd.