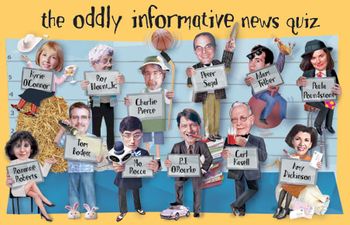 Wait, wait, here's the stars of the show.
Advertisement:

Wait, Wait... Don't Tell Me! is a radio quiz show that airs weekly on NPR and based in Chicago. It is hosted by Peter Sagal with veteran newscaster Bill Kurtis as announcer/scorekeeper. Previous to Kurtis, the announcer/scorekeeper was late NPR News anchor Carl Kasell, who stepped down in 2014 and was considered to be the show's scorekeeper emeritus until he passed away from complications of Alzheimer's disease in 2018.

The program, which premiered on January 3, 1998, is one of the few successful American attempts at adapting the quintessential British Panel Game format and is based loosely on the BBC's venerable The News Quiz (which also inspired Have I Got News for You). Every week, Peter and Bill are joined by a rotating cast of panelistsnote including Tom Bodett, P.J. O'Rourke, Paula Poundstone, Paul Provenza (director of The Aristocrats), and Mo Rocca (formerly of The Daily Show, currently of CBS Sunday Morning) who play quiz games based on the previous week's news. The topics tend to be silly or focus on the more ridiculous aspects of otherwise serious news stories.

The showcase of each episode is "Not My Job", where a celebrity guest has to answer three trivia questions to try and win a prize for a listener. Listeners also get to call in for the chance to win a prize for themselves. For many years, the only prize available was the highly coveted chance to have Carl Kasell record the greeting on their answering machine/voice mail service. In 2017, however, the prize was updated so that winners can choose to have anyone associated with the show record a voice mail greeting.

Bill Kurtis:Well, if any of those tropes happen, panel, we'll ask you about it on Wait Wait... Don't Tell Me!