Bringing in the Expert 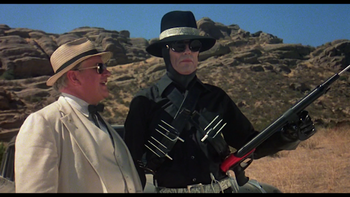 Doc Hopper: This is Snake Walker. Tell 'em what you do, Snake.
Frog Killer: [removes his sunglasses] Kill frogs.
MacCready: If you can't handle it, get me somebody who can! Get me Bruce Lee!
Cobb: Bruce Lee is dead.
MacCready: Then get his brother!
— Blind Fury
Advertisement:

An underling fails, so their employer hires the best man (or woman) to get the job done — usually played out by villainous characters, who suffer a bitter and humiliating defeat at the hands of the hero by proxy, when the hero defeats their champion. Enraged at their defeat, they do not engage the heroes face to face themselves, but use their financial means to acquire the toughest specialists money can buy, to settle the score. The expert may be Only in It for the Money, but some are actually interested in the prospect of a Worthy Opponent to test their mettle. If the expert is soon defeated or killed despite their expertise, he (or she) is The World's Expert on Getting Killed.

Subtrope of Hired Guns. Compare Cast the Expert and Sorting Algorithm of Evil. Not to be confused with Expert Consultant.