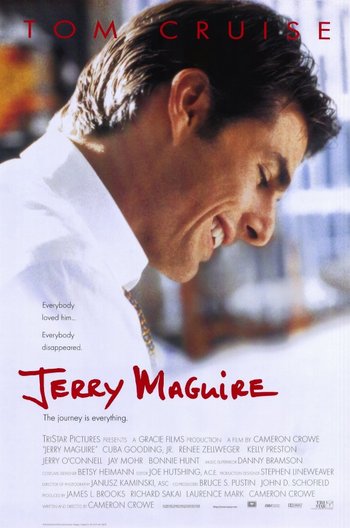 Everybody loved him... Everybody disappeared. The journey is everything.
Jerry: I love you. You... you complete me. And I just...
Dorothy: Shut up. Just... shut up. You had me at "hello."
Advertisement:

So there's this sports agent, Jerry Maguire (Tom Cruise), and he's got a pretty sweet deal going on. He's great at his job and it earns him a lot of money and respect, he's got a hot redheaded fiancee who's ready for a threesome and an admiring protege. Then the son of a client with a concussion tells him off. This leads to a nervous breakdown which turns to an epiphany where he realizes how disingenuous and corrupt the sports agent business is. He tries to be friends with everyone, only to see he was helping a lot of self-centered Jerkasses get away with illegal and immoral acts while making millions of dollars.

He writes a manifesto on what we think but don't say, which he passes out to his entire firm. But there is a reason we don't say those things, and he is fired in short order. Losing his clients, future clients and his fiancee, his only solace is retaining a single athlete, football player Rod Tidwell (Cuba Gooding Jr..), and inspiring a secretary at the firm, Dorothy Boyd (Renée Zellweger), to join with him. Tidwell is a talented athlete but has a far greater ego, making his upcoming contract re-negotiation a nail biter. Jerry and Dorothy soon fall for each other, but they wonder if it's true love or one of convenience and consideration of her young son Ray (Jonathan Lipnicki).

Written and directed by Cameron Crowe, this 1996 film is noted for its feel-good factor, placement way up on the idealistic end on the Sliding Scale of Idealism Versus Cynicism, and use of many memorable quotes like Tidwell's repeated use of "SHOW ME THE MONEY!".

Show Me The Tropes!!: