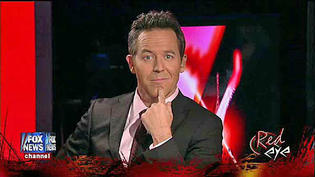 "Welcome to Red Eye. It's like Return of the Jedi, if by 'Jedi', you mean 'mysterious rash shaped like an avocado'."
Advertisement:

Red Eye with Greg Gutfeld is Fox News Channel's successful comedy offering, a panel discussion show originally hosted by former Maxim UK Editor Greg Gutfeld, along with his "repulsive sidekick" Bill Schulz (who vanished without much of an explanation in November 2013), and ombudsman (now full-time panelist) "TV's" Andy Levy. It airs at 3:00 am ET Tuesday through Saturday. In February 2015, Greg left Red Eye to host The Greg Gutfeld Show. In June 2015, the position of permanent host was handed over to comedian Tom Shillue.

The show hovers between News Parody and Faux News, and it's like The View if The View had a decidedly pro-Camp Gay bias. Dissimile and absurdist tangents abound. Vulgar Humor and double entendres are sprinkled throughout, especially when introductions

are given. The show features panelists and guests discussing the latest news in politics, pop culture, entertainment, business, sports, and religion.

Guests on the show are primarily composed of political pundits, stand-up comedians, musicians, authors, and attractive women, with most episodes containing one of each (and almost every episode featuring an attractive female panelist sitting in the chair at the far right of the table, affectionately referred to as the "Leg Chair"). Political opinions vary amongst the guests, with the show's original trio consisting of an oddly perfect balance: Greg's a conservative-leaning libertarian, Bill's a liberal, and Andy's a libertarian who hates both conservatives and liberals. The show takes pot-shots at everyone and everything under the sun, including Fox News itself. Despite its middle-of-the-night timeslot, the show has beaten many primetime cable news shows in the ratings, and developed a loyal cult following, making it arguably the only news program that can currently claim this status.