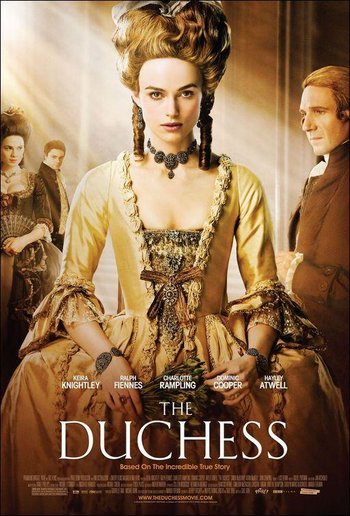 The Duchess is a 2008 film from BBC Films and Pathé (distributed in America by Paramount), directed by Saul Gibb, with musical score by Rachel Portman, and starring Keira Knightley, Ralph Fiennes, Hayley Atwell and Dominic Cooper.

Set at the end of the eighteenth century, the film is based on the life of Georgiana Cavendish, Duchess of Devonshire. While her beauty and charisma made her name, her extravagant tastes and appetite for gambling and love made her infamous. Married young to the older, distant Duke of Devonshire, who was blatantly unfaithful, Georgiana became a fashion icon, a doting mother, a shrewd political operator, intimate of ministers and princes, and darling of the common people. But at the core of the story is a desperate search for love. The film delves into Georgiana’s passionate and doomed affair with Charles Grey, the future Prime Minister and Earl Grey, and the complex love triangle with her husband and her best friend, Lady Bess Foster.