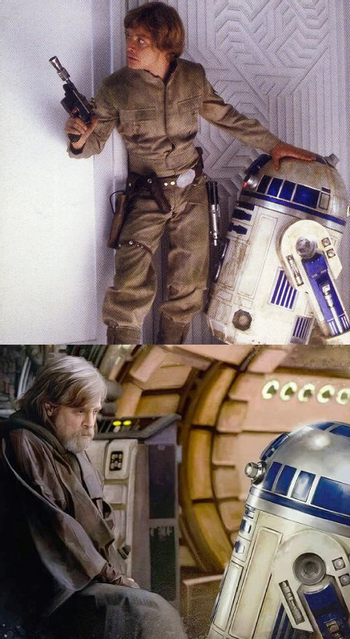 A character has an old robot and deliberately keeps it despite new models being around.
Advertisement:

It can be done for practical reasons or just to save money. If it's not, it's always a trait of good characters or, when villains do it, a Pet the Dog kind of trait.

This is often An Aesop (and not even a very hidden one) where the old robot will be shown to have a much more developed (and human-like) personality, while the new models will be more able and better looking but unfeeling. It can be justified if robots learn humanity from humans over time and thus the old robot is more developed in this way. However, it may just be sentimentality — the character has a relationship with the old robot that a Replacement Goldfish wouldn't fulfill. If the character believes that Androids Are People, Too, the idea of replacing a friend or adopted family member with a newer model would probably be unthinkable.

Alternatively, it could be used to establish a character's Perpetual Poverty, alongside their battered spaceship and antique internal-combustion car. After all, whatever the technology level, you can assume a state-of-the-art robotic assistant would be an expensive investment, so an older model might be all their budget allows.

On a more cynical level, this can be down to Special Effects budget concerns. Animating your Robot Buddy takes a lot of effort, but it's worth it to flesh out (pardon the expression) a main character - but why put the same work into background characters when Ridiculously Human Robots require just a bit of makeup?