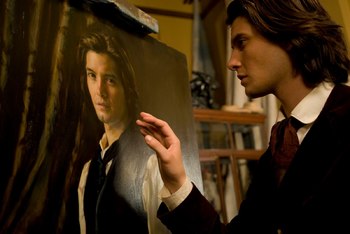 What happens when a work focuses on art, but the story itself is entirely fictional? You get this: the fictional painting, which only exists in-universe. Often these paintings are quite important to the story to where the plot hinges on them, so creative control over the exact details of the painting can be very helpful. If one of the characters is a painter themselves, chances are they'll end up making one of these paintings, but more often they're treated as famous historical works found in museums and galleries.

More notable examples such as the eponymous portrait in The Picture of Dorian Gray tend to be prone to Defictionalization, sometimes resulting in several different contradictory versions by different artists.

Sister-trope to Fictional Document, Fictional Video Game, Fictional Board Game, and the Show Within a Show. Using this method can avert Artistic License – Art. Related to Anomalous Art.