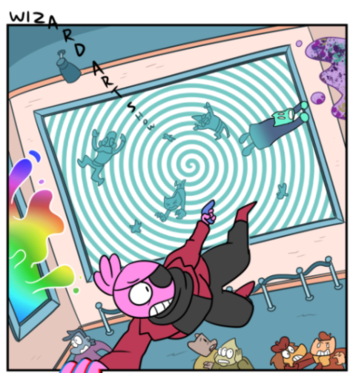 "Art is the ultimate expression of Chaos. When I say art, I'm not speaking of the droll portraits that hang in every home, nor the landscape scenes that capture the beauty of our great Empire. No, I'm speaking of those pieces produced in the feverish imaginations of the mentally diseased, those men and women who capture the perverse landscapes of their nightmares. These are reflections of evil, of Chaos in its truest form. That which does not exist in our world is of the Realm of Chaos, and to dabble in imagination is surely as damning as embracing the Ruinous Powers directly."
— Gallo, Witch Hunter of Bechafen, Warhammer Fantasy Roleplay ("Tome of Corruption")
Advertisement:

When Mad Scientist meets Mad Artist, what is the Frankenstein's Monster?

Portraits whose eyes follow you. Statues that come to life and try to kill you. Photographs that act as portals to otherworldly pocket dimensions of sepia-tone. When a Mad Artist has access to Applied Phlebotinum or The Dark Arts, they usually make Phlebotinum-based Dark Artwork out of it where it is unleashed onto any poor curator or patron to whatever museum or street-gallery it is displayed in. It can be an Ancient Artifact of an anonymous painter or animist from some foreign land, or it can be some abstract drip painting from a New York cruiser. Either way, magic is magic.

Can sometimes be an accessory to Art Attacker. Often overlaps with Artifact of Doom. If the work of art exists in real life and becomes magical in fiction, it is considered a Public Domain Artifact (Defictionalization for the reverse).

The dark form that Lucy's feelings have created lurks in the depths of her inner world. She hides in a tubular space and attacks by throwing paint and serrated picture frames.

The dark form that Lucy's feelings have created lurks in the depths of her inner world. She hides in a tubular space and attacks by throwing paint and serrated picture frames.