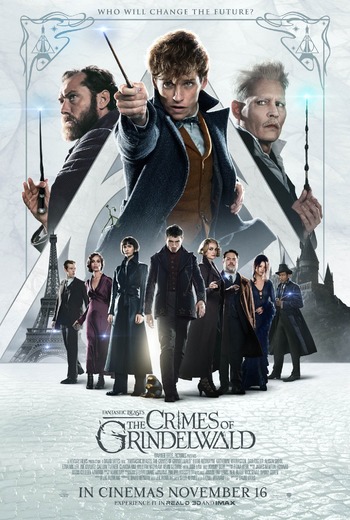 "I can't move against Grindelwald. It has to be you."
"Mr Scamander. The wizarding and non-wizarding worlds have been at peace for over a century. Grindelwald wants to see that peace destroyed and for certain members of our community his message is very seductive. Many purebloods believe it is their birthright to rule not only our world but the non-magic world as well."
— Arnold Guzman
Advertisement:

Fantastic Beasts: The Crimes of Grindelwald is the sequel to Fantastic Beasts and Where to Find Them, the second film in the Fantastic Beasts series and the tenth film overall in J. K. Rowling's Wizarding World. It is directed once again by David Yates. Rowling herself returned to write the screenplay.

The story is set in 1927 and takes place primarily in Paris, with scenes in London and the rest of the U.K. as well as New York City. At the end of the first film, the powerful dark wizard Gellert Grindelwald, after committing (under the guise of MACUSA Director of Magical Security Percival Graves) a devastating terrorist attack upon the City of New York using a young Credence Barebone's Obscurus, was captured by MACUSA with the help of Magizoologist Newt Scamander. But, making good on the threat he made, Grindelwald now has escaped custody and has set about gathering followers to his cause, most of whom are unsuspecting of his true agenda: to raise pure-blood wizards and witches up to rule over all non-magical beings.

In an effort to thwart Grindelwald’s plans, Albus Dumbledore enlists his former student and protégé, Newt Scamander. Newt agrees to help, unaware of the dangers that lie ahead. Lines are drawn as love and loyalty are tested, even among the truest friends and family, in an increasingly dark, dangerous, and divided wizarding world.

An extended cut was released with the film's digital release on February 15, 2019. A sequel, Fantastic Beasts: The Secrets of Dumbledore, was released on April 15, 2022.

Fantastic Beasts: The Crimes of Grindelwald contains examples of:

"Mr. Scamander, do you think Dumbledore will mourn for you?"