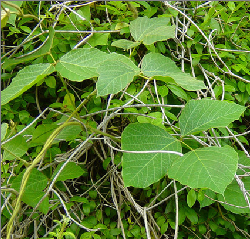 The Trope Namer invades another plot of land with its loose ends.
Coyote: How is that for an enigmatic answer?
Ysengrin: Very enigmatic. It barely answers anything at all.
Antimony: In fact, it raises more questions than before.
— Gunnerkrigg Court
Advertisement:

A Kudzu Plot occurs when a story leaves so many tangled Plot Threads that it's extremely difficult to follow and ridiculously complicated. A story arc may be resolved, but it will usually create more unanswered questions in the process. This can also happen multiple times within the same story.

It's a common result of very heavily planned and lengthy Myth Arcs; if a writer can't adequately resolve everything he's set up, it will become too difficult for him to resolve everything to the audience's satisfaction. Also, because of the First Law of Metafictional Thermodynamics, there's only a limited amount of energy in any given plot to go around to all the little plot threads, so the more plot threads there are, the less attention will be devoted to any of them.

However, Tropes Are Not Bad; even though a story may be confusing or intricate, a Kudzu Plot can be well executed and rewarding in the hands of a skillful author. An author may do this deliberately to confuse the audience or add an air of chaos or mystery to the story (i.e. the characters don't understand everything, so why should the reader?). A good way to keep such plots in line is with an overarching Driving Question. That said, they are extremely hard to execute well and many authors fail or create them by accident. But the satisfaction when a Kudzu Plot comes together well is a rare and special enough event that many of the works that did do it well are considered some of the greatest works of fiction in human history.

See also The Chris Carter Effect, where fans lose patience with a plot like this and give up on a story before the author has a chance to end it and Plot Archaeology, for when a plot appears abandoned only to suddenly return for a resolution.

The Trope Namer is a plant, one of Japan's top exports to the Deep South. It was initially imported as a way to improve the soil, but it quickly gained a reputation for growing all over the place, being very hard to rein in, and choking out other plants. Named after the same plant as Alien Kudzu, but the two tropes are unrelated.

In his Top 10 Worst Cartoons Based On Video Games videos, Nick Cramer tries to explain the complicated plot of Blazblue in his seventh entry (BlazBue: Alter Memory) only for it to drive him into a mad rant, about it's overly complicated storyline.

In his Top 10 Worst Cartoons Based On Video Games videos, Nick Cramer tries to explain the complicated plot of Blazblue in his seventh entry (BlazBue: Alter Memory) only for it to drive him into a mad rant, about it's overly complicated storyline.