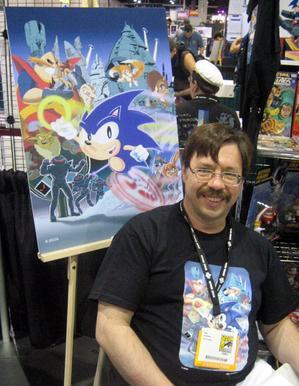 Ken Penders is a former main writer of the Archie Sonic titles.

Making his debut in Sonic the Hedgehog #11, Ken was one of the many creatives that defined the early Archie Sonic universe, focusing particularly on Knuckles the Echidna and The Chaotix. While best known as a writer, Ken was also involved in nearly every aspect of the comic, regularly contributing art and being the only person to have ever filled every non-editorial role in the creation of a story (Sonic the Hedgehog: #93) in the history of the series.

Ken is well known for his legal disputes with Archie Comics and Sega, his grievances with the former being one of the key causes behind the series' 2013 reboot. All characters created by Ken or directly inspired by his stories have since been excluded from the series.

Although often considered a major influence on Archie Sonic's established universe and easily one of the most involved creators to work on the franchise, several of Penders' decisions when writing for Archie, as well as several of his recurring writing habits, have been the subject of criticism from fans. Notable criticisms include the glut of characters introduced in his stories, his disregard for story elements established in the series' source material, his penchant for secret family members and monologue-ing, and a lack of distinguishing features between characters he created.

Some tropes about Ken Penders and his work. Obviously, these tropes are about his work and views, not about himself.