Anime / Sonic the Hedgehog: The Movie 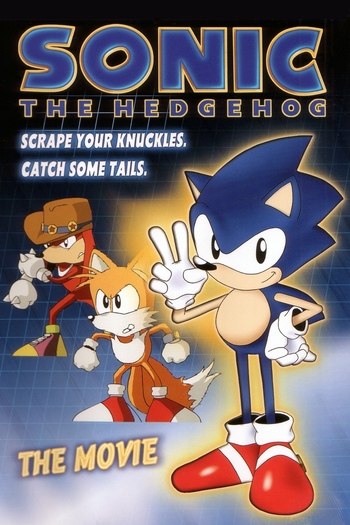 "Finally! The only thing left to be done is to capture the essential life data from your counterpart, then you'll be complete, my Hyper Metal Sonic! When you awaken... kill him!
—Dr. Robotnik, Opening Monologue
Advertisement:

An hour-long anime OVA starring everybody's favorite blue hedgehog. Produced by Studio Pierrot and Sega, it was originally released in Japan in 1996 initially as the two half-hour VHS tapes Journey to Eggmanland and Sonic vs. Metal Sonic. While one of the original previews of the OVA was featured in 1997's Sonic Jam in all regions, a proper English dub by ADV Films was released on September 7, 1999, two days before Sonic Adventure internationally hit the shelves.

Sonic and Tails are chillaxing on the beach when they receive a dispatch from the President of South Island: he and his daughter Sera are being held hostage (for a given value of "hostage") by Dr. Robotnik. Oddly enough, what Robotnik wants is Sonic's help: he's been forced out of his base by the evil(er) Metal Robotnik, who has overloaded the power generator of Robotropolis. In less than a day, the generator will explode and cause the end of Planet Freedom as we know it. Sonic and Tails fly off to the city; along the way, they're joined by the free-roaming treasure-hunter Knuckles (and his hat), who just happens to be in the area.

However, when the trio finally reach the generator, they find that the story was a ruse to extract Sonic's DNA and enable the completion of Hyper Metal Sonic: a robotic dopplegänger who not only has Sonic's speed, but Sonic's personality as well. Also, it turns out that Robotnik actually has no compunctions about blowing up Planet Freedom, since he'll then rule it by default — followed by "a life of undisturbed marital bliss with Sara."

Being co-produced and supervised by Sega and Sonic Team respectively, and both Yuji Naka and Naoto Oshima being production directors, this anime possibly served as the true vision of what they had intended the series to be at the time, a feat that couldn't be fully realized with the hardware limitations of the Sega Genesis. As such, it's suggested the many key elements found in later games like Sonic the Fighters, aforementioned Sonic Adventure, and more recently Sonic Mania were likely inspired by this anime.

This film is not to be confused with the live-action movie released in 2020, or the Sonic X anime series.

Sonic the Hedgehog: The Movie provides examples of: