Animation / Song of the Miraculous Hind 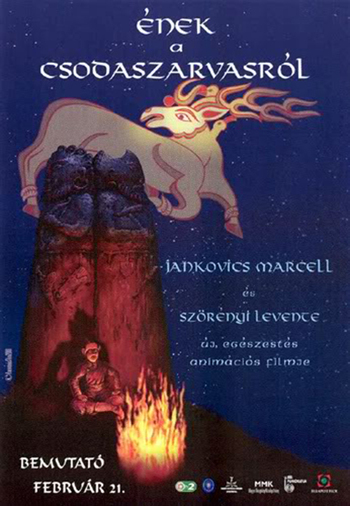 Ének a Csodaszarvasról (Song of the Miraculous Hind) is a semi-educational 2002 mythological animated movie from Hungary, directed by Marcell Jankovics and released by the Pannonia Film Studio. It chronicles the ancient Hungarian history and myths via abstract animation that ceaselessly switches between dreamlike and more realistic art styles. The stories are told through a combination of pure visuals, numerous narrators, spoken dialogue and a multitude of period-appropriate songs, composed by performer Levente Szörényi.

The film is split into four main episodes or songs, each inspired by imagery found on an ancient vase from the Treasure of Nagyszentmiklós

Like many other Jankovics films, Song of the Miraculous Hind mainly focuses on mythology and an overwhelming barrage of symbolic and sublime imagery over a cohesive narrative or characters. Though shown in theaters, the movie was also made as a teaching tool for Hungarian schools, with no intent to reach a foreign market.

The film, though not a failure, was also met with controversy and disinterest, and is Jankovics's most overlooked feature. Critics praised the bold and experimental visuals but were unimpressed by the animation quality and the lack of a plot. Much criticism targeted the way the film floods the senses with a constant, fast flowing stream of information via incomprehensible ancient symbolism, song lyrics that are hard to make out, little differentiation between fact, fiction and disputed theories, and bonkers art design most only describe as psychedelic. Being a partially educational work with no attempt to entertain, many viewers found it unengaging, while the nudity, violence and allusions to sex were thought unsuitable for young schoolchildren. Some even accused the film of being propaganda, in part due to Jankovics's strong rightwing nationalist leanings and his political position at the time of its production.

These days, the film is seen as an interesting and passionate art experiment by most and a Stoner Flick by some, though its handling of its subject matter remains a topic of debate.