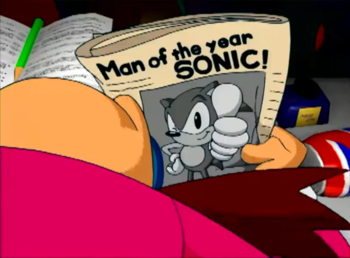 Sonic the Animation (also known as "Man of the Year") is an animated short based off of Sonic the Hedgehog. It was created in 1994 by TMS Entertainment (then known as Tokyo Movie Shinsha) in conjunction with Sega AM3. The short was later included on Sonic Jam.

The plot starts in a nameless city. Doctor Eggman has recently woken up and is still in his pajamas when he sees a newspaper stating that his worst enemy, Sonic the Hedgehog, has been dubbed "Man of the Year". Eggman hatches a plan to dress up as Sonic and vandalize the city. Suddenly, Sonic's gone from "Man of the Year" to "Worst of the Year". The short ends with a crowd of angry people yelling at a confused Sonic while Eggman (still in his Sonic getup) gloats in the background.

Sonic the Animation predates Sonic Adventure by 4 years, however even in 1994 it was clear that certain ideas were in place. The short features a urban city full of humans that strikingly resembles Station Square.

Sonic the Animation provides examples of: