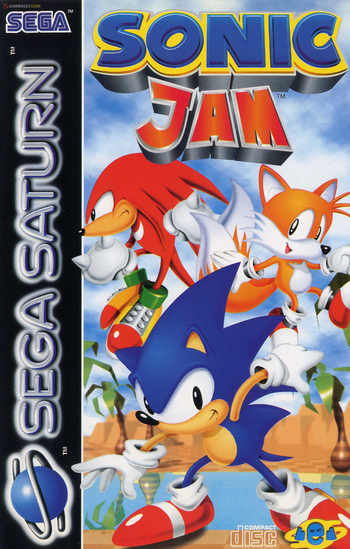 "And Sonic continues to spin towards the future. Nothing will stop him!"
Advertisement:

Sonic Jam is a Compilation Rerelease of Sonic the Hedgehog games released for the Sega Saturn in 1997. It includes portsnote Not emulations, actual ports; different sound effects and music looping confirm these are not the Genesis games running on Saturn hardware of Sonic 1, 2, 3, and Sonic & Knuckles as well as the Lock-On capabilities, meaning the full Sonic 3 & Knuckles, Blue Sphere, and Knuckles in Sonic 2 are also playable. Each game has some difficulty options which changes or removes some levels and there is also a option to enable Sonic's Spin Dash in the first game.

The game also has a short 3D level called "Sonic World", in which Sonic can complete a few fetch quests, interact with some items and enter some rooms where the player could listen to the games' music and view things like videos, concept art, game manuals and various bits of trivia, similar to the early Namco Museum games. Needless to say, it was the closest Sonic got to being in a 3D platformer in the 32-bit age, as Sonic X-treme was never finished.

Not to be confused with the Game.com Sonic Jam game, which is simply a collection of levels loosely based on some from Sonic 2, 3, and Sonic & Knuckles, and is regarded by many fans as the worst Sonic handheld game in history, if not of all time.

In 2022, these classic games, plus Sonic CD, would be compiled again in Sonic Origins.

For the animated short featured in this game, see Sonic the Animation.