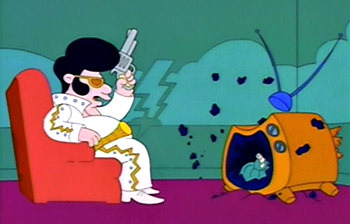 "Aww, this show ain't no good..."
"So I bought a .44 magnum, it was solid steel cast,
And in the blessed name of Elvis, well, I just let it blast,
'Til my TV lay in pieces there at my feet,
And they busted me for disturbing the almighty peace."
— Bruce Springsteen, "57 Channels (And Nothin' On)"
Advertisement:

When a character is finished watching TV and has a Hair-Trigger Temper, is an Eccentric Millionaire who replaces electronic devices like normal people replace rolls of toilet paper, or just can't get the remote control working, he'll whip out a gun and shoot the television set (or otherwise destroy it).

In the event that a news item or message on television is the cause of the sudden anger or frustration that makes someone do this, the trope may be a slight variant on Shoot the Messenger. Other times, it may just be a sign that someone is so wealthy that they can afford to live in a way that involves wasting expensive home appliances in this manner.

In Video Games, television screens and monitors occasionally appear as an interactive, breakable object which the player character can destroy, especially when a villain character appears on these to taunt the player.

The Trope Codifier is Elvis Presley, who was known for doing this at least once, possibly many times. Several stories and explanations of Elvis doing this exist, some, perhaps, less true than others. He's rumored to have kept a basement full of spare TV's so he would always have a fresh set handy after destroying another one. One television set shot by Elvis is on public display at Graceland.

Subtrope of Percussive Shutdown. Compare Agitated Item Stomping, Ring Ring CRUNCH, Appliance Defenestration, and Cutting the Electronic Leash. Sometimes coincides with Computer Equals Monitor or Screens Are Cameras, in the event that the destroyed TV screen is part of a larger system. Not to be confused with Smash TV. If the character is shooting your television screen, that is Camera Abuse.