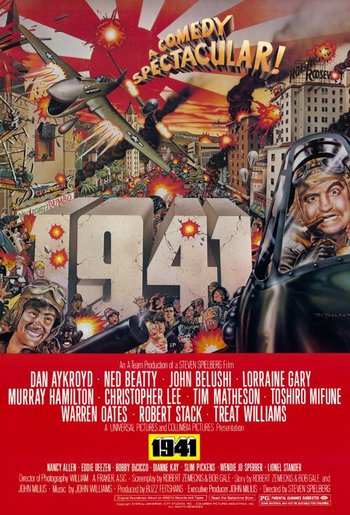 "This isn't the state of California, it's a state of insanity."
— Gen. Joseph W. Stilwell (Robert Stack)
Advertisement:

1941 is a 1979 American epic war action comedy, directed by none other than Steven Spielberg, which takes place, surprisingly enough, in the year 1941. The script was written by Robert Zemeckis and Bob Gale, and John Milius executive produced and co-wrote the story.

That story follows the panic that ensues when, in the days after Pearl Harbor, paranoid Californians believe another attack is imminent. It's very loosely based on actual events

(which, for one thing, actually occurred two months later, in 1942).

Spielberg, with the combined backing of two major studios (Universal and Columbia), spared no expense in making this film. It has special effects rivaling those of "serious" World War II epics, and the All-Star Cast reads like a who's who of movie comedy in The '70s, all in the service of Slapstick. Unfortunately, it was a critical bomb and received disappointing box office numbers (though it wasn't the complete flop it's usually remembered as), and stands as the one misfire in Spielberg's otherwise-outstanding run of blockbusters between 1975 and 1982.

Not under any circumstances to be confused with 1984, or with the third game in Capcom's 1942 video game series.