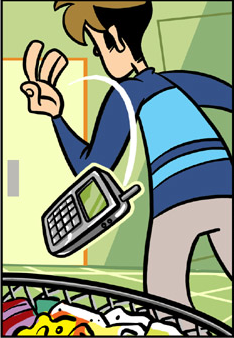 What do you do if your Bad Boss decides that you're on call 24/7 whether you like it or not? Well, if this happens after you've discovered What's Really Important™ (hint: it's never "getting ahead" or "making money"), just dispose of your cell phone, preferably by throwing it into the nearest body of water. Never mind that it would be a little easier (and far less expensive) to just turn your phone off, or that you might want to ring your friends or loved ones at some point in the future, or that you might need to call for help if you ever happen to find yourself in a horror movie.

Nope, screw all that, you're Making a Statement! Toss it in a river, off a cliff, over a rainbow! Drop it on the floor and grind it underfoot like your job does to you! Find out what a blender will do to it! Dunk it in lighter fluid and burn it at the stake! For bonus points, give a wittily appropriate Bond One-Liner to the person on the other end before you do it.

This may mean you're quitting that oppressive job for good, but you could also just be temporarily shirking your occupational responsibilities in favor of the aforementioned Really Important stuff. As Technology Marches On and people keep more and more of their lives on their (even more expensive) phones, this is becoming a much more drastic statement of anti-materialism.

Related to Ring-Ring-CRUNCH! and Shoot the Television. Compare Removing the Earpiece, It's All Junk. Not to be confused with Refusal of the Call; in fact, this tends to indicate the opposite. Nor does it involve an actual leash meant to deliver electric shocks. Naturally lends itself to an Impeded Communication, and can create a Suspicious Missed Messages scenario.