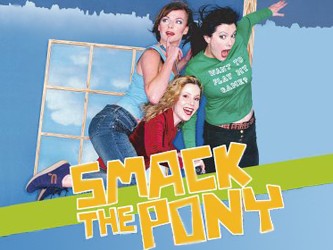 Smack the Pony is a British Sketch Comedy show that aired on Channel 4 from 1999 to 2003 (3 seasons comprised of 7 episodes each, with 2 Christmas specials) and starred comedians Fiona Allen, Doon Mackichan and Sally Phillips, with regular appearances from Sarah Alexander, Cavan Clerkin, Darren Boyd and James Lance. It was notable for the main cast being entirely female, the male characters and performers usually only having bit parts.

The comedy style is surreal and often nonsensical, with quick, rapid-fire skits that tend to feature otherwise normal, everyday situations with one really off-the-wall element inserted and taking up most of the focus — such as a boss who tells off her employees in silly voices, an otherwise shy woman having dozens of nude paintings of herself in her living room and asking guests not to look at the paintings, a wife keeping her husband awake, first by hogging the covers and then by playing the drums in her sleep. Every episode also had one musical number towards the ending, which was usually a pastiche or spoof of contemporary music.

The show won an Emmy in both 1999 and 2000 for "Best Popular Arts Show." Two of the skits also made it onto Channel 4's list of the 50 Greatest Comedy Sketches, with Saying Goodbye

at 39 and Singing Match