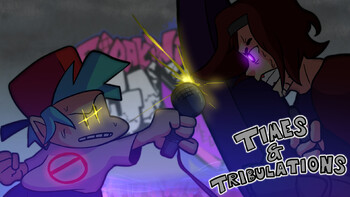 Friday Night Funkin', but it's about time travel!
Boyfriend: "Beep!"
Omega: "Kid, get behind me. Identify yourself! Friend or foe?"
Boyfriend: "Beep"
Omega: "Alright, there's a language gap here, I can work with that."
—Cutscene before "Mercenary"
Advertisement:

After failure upon failure of the assassins, hitmen, and other assorted baddies Daddy Dearest has hired to kill Boyfriend, he throws a book at his bookshelf, lamenting that no one in this era can even lay a finger on the kid. Cue Daddy Dearest getting hit in the head with a book entitled "Great Warriors of Their Time" - flipping through it, he discovers a mercenary by the name of Omega, and decides he is the perfect person for the job. A portal opens up under Boyfriend and Girlfriend's feet, sending them sprawling through time…

has quite a lot to offer. Think you're up to the challenge?

Times and Tribulations: Vs Omega contains examples of: