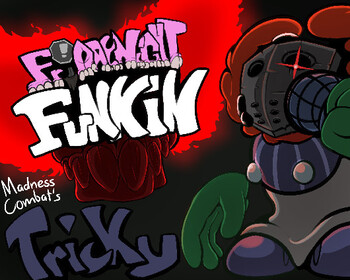 , the latter two being the same ones who worked on Vs Whitty and Friday Night Funkin': B-Side Remixes, respectively.

While the devs of the vanilla game eventually plan on adding Madness Combat's Hank J. Wimbleton — both as an opponent and as a playable character — this mod introduces one of his most persistent and dangerous opponents, Tricky the Clown.

Somewhere in Nevada, The Boyfriend and The Girlfriend are taking a stroll when a familiar stop sign pops up right in front of them, and out from its shadow...

Tricky, the Nevadian Champion himself, emerges, twitching violently all the while with no intent on letting our couple pass. In order to escape this hellish monster of a beast, The Boyfriend is forced to combat Tricky in a rap battle. He soon finds himself in one of the toughest fights he's ever been in; with Tricky on the mic empowered by the Portable Improbability Drive, there's no telling what could happen, especially once the Improbability Drive - and eventually, Tricky's wrath - is pushed to its limit...

It can be found on Gamebanana

REALITY COMPROMISED. THE TROPES HAVE BEEN ENGAGED.