Video Game / Vs Bob And Bosip 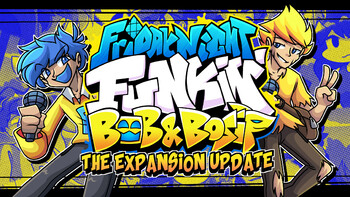 Vs. Bob and Bosip

was a Friday Night Funkin' mod created by AmorAltra. In this mod, Bob and Bosip, the personifications of Amor's Geometry Dash Cube and Ship icons, want to play Minecraft together and create a portal that was intended to bring them into the world of the game. However, upon entering, they realize they're in a different game they don't recognize at all. They learn that they're in a game called Friday Night Funkin', and their only way out is to beat Boyfriend in a rap battle.

In August of 2021, "The Expansion Update" released, rehauling the mod's UI and adding a bonus week against some of the mod team in addition to a crossover week featuring Bob and Ron from Literally Every FNF Mod Ever.

On December 25th, 2021, all development for the mod past the EX Update was shelved indefinitely after the people in charge of the future updates cut all ties with AmorAltra (see the Trivia page for more information on why), and the mod itself was trashed from GameBanana two days later. The mod's future is unclear, especially considering that the team split up

, but charter Cerbera has implied its storyline will be altered to remove Amor, with "Split" and "Oblique Fracture" being sung by Cerbera's character Richard from the mod Crypto Crackdown instead, although that last part was at least implemented in other FNF fan games like Funky Friday

, however it is unknown if this would also apply to Bob and Bosip.