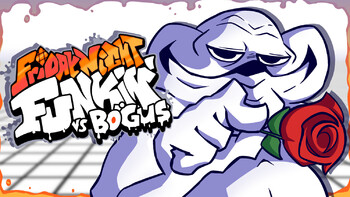 Oh, hey babe. What brings you around these parts? Could it be my... manly charms?
Vs. Bogus is a Game Mod for Friday Night Funkin' created by Cally3D and ThisIsBennyK, and is a somewhat stealthy crossover with Reddit... or rather, the negative stereotypes associated with some of its more... questionable users.
Advertisement:

Boyfriend and Girlfriend are going about their day, when all of a sudden, Bogus, a pale white, sweaty and incredibly fat humanoid approaches them, insisting that he'd be a better suitor for Girlfriend than Boyfriend. However, he's never going to get what he wants - not that he knows that!