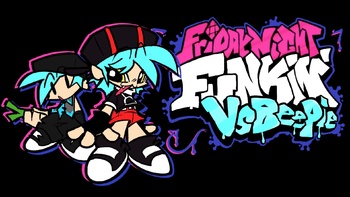 is a Friday Night Funkin' Game Mod made by valengarfy. It is currently a demo featuring two new songs and new costumes for Boyfriend and Girlfriend.
Advertisement:

Boyfriend and Girlfriend have been invited to the Anime Expo and are cosplaying for the occasion. Boyfriend is dressed as his sister, Hatsune Miku, while Girlfriend is dressed as Nyan Cat. At the event, they ask a member of the audience to come up on stage and challenge Boyfriend to a rap battle. That member happens to be Beepie, an obsessive fangirl who wants to have Boyfriend all to herself, much to him and Girlfriend's dismay. Can a rap battle perhaps calm her down?