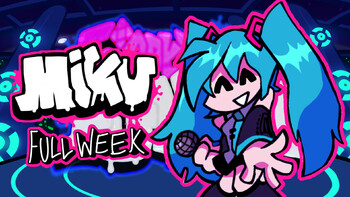 It's just you, your famous popstar sister, your girlfriend, and an entire audience expecting a grand show. No pressure!
Advertisement:

is a Friday Night Funkin' mod created by evidal and GenoX. This mod pits Boyfriend against famous Vocaloid popstar Hatsune Miku, who just so happens to be his older sister.

The story is that Miku wanted to meet Girlfriend and have a civil conversation with her, but Boyfriend stumbles onto a stage and be confronted by thousands of Miku fans. Now having to face the daring task of impressing Girlfriend and the fans, Boyfriend is ready to prove what he's capable of as he shows Miku what he's learned since their time spent apart.

A 2.0 update was later released, revamping the week with new songs and adding cutscenes. The songs from the original version are still available in Freeplay.