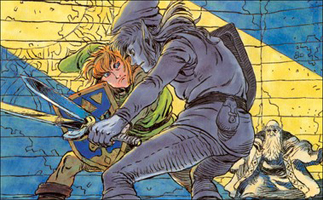 Swallowing enemies whole. Flying around with a jetpack. Or just jumping high. Video game heroes can have a wide variety of powers; they're fun to play around with, and they'll let you conquer just about any boss battle. You just need to dodge around its attacks and Attack Its Weak Point for massive damage.

But what if those same powers were used against you?

Simply put, a Mirror Boss is a boss in a game whose abilities are the equivalent of the playable character's somehow. This doesn't have to be exact, and it's relative to what the other bosses tend to be like; if most of the game's bosses are gigantic, then just being the same size as the hero counts for a lot, but if everyone in the game is humanoid, a Mirror Boss will have a very similar fighting style.

Depending on how close the boss' abilities are to the hero's, there may have to be some form of "cheating" to insure that the boss is still a challenge. Giving them special immunities to things that would normally destroy the player, some Secret A.I. Moves to separate them from the hero, or just any general application of My Rules Are Not Your Rules to prevent the player from exploiting certain weaknesses. In a rare occasion, a Mirror Boss can turn out to be controlled by another player, as a PvP match in a boss' clothing.

If this boss isn't an Evil Knockoff of the hero, expect him or her to be a Rival or Evil Counterpart of the hero, and thus an important character in the game.

As you might expect, this is usually a form of Duel Boss.

What else did you expect from someone called "Shadow"?

What else did you expect from someone called "Shadow"?