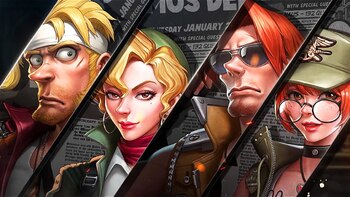 You only get to play as Tarma, Eri and Fio after unlocking them, though.
Advertisement:

Metal Slug: Code J is a 2021 video game produced by SNK, with collaboration from TiMi Studios (a subsidiary of Tencent Games) for the iOS and Android.

A remake of SNK's 90s' classic shooter, Metal Slug, the game rehashes most of the plot from the original series, but with only one playable character from the start — Marco Rossi from the original game, where Marco's allies, Tarma, Fio and Eri, are only available after being unlocked.

In the aftermath of a botched mission to arrest General Morden — namely, attempting to pursue the fleeing Morden who had boarded the Big Shiee, before a nuke attack interrupts the battle and knocks Marco out cold — Marco finds himself separated from his three allies. Now alone, Marco will need to track down General Morden in various levels recycled from the original games.

, by the same developer.