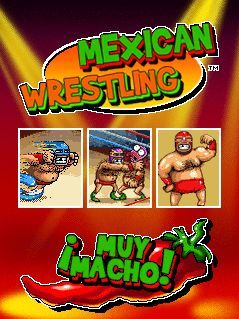 The straightforwardly titled Mexican Wrestling is a Fighting Game for mobile phones with lucha libre aesthetics that doesn’t take itself too seriously. It was developed by Glu Mobile in 2008.
Advertisement:

In Career Mode, you will play as El Gordo (default name) and take on wrestlers of increasing difficulty with the guidance of an Eccentric Mentor called "Churro." Earn macho points from beating other wrestlers to train your wrestler’s chest, legs, and arms and learn new moves. Defeated luchadores will be available to be fought freely in Match Mode.