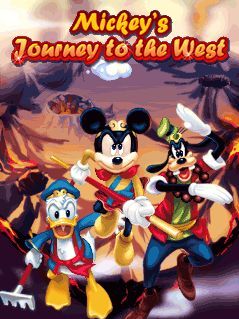 Mickey's Journey to the West is an Eastern RPG with puzzle elements for mobile phones that features Mickey Mouse, Donald Duck, and Goofy in the setting of Journey to the West. It was made by Enorbus, a company Disney bought in 2007

Mickey, Donald, and Goofy are simple farmers in Ancient China who have been losing their chickens the past few days. They went inside a cave to look for the thief but instead, they found a box with a letter from Sun Wukong, Piggie, and Monk Sha telling them that it is fate that brought them there.

With the help of the Deity of Earth, they train to become the new heroes worthy of the powers of the three great legends.