Grievous Harm with a Body 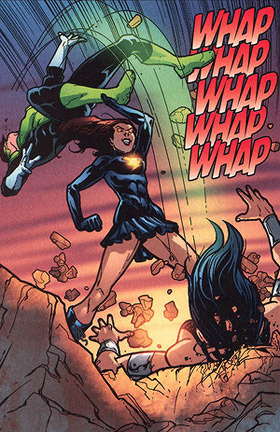 The sound of one man whapping.
"... and one count of using a victim as a deadly weapon against another victim."
— Judge,

Two common variants exist. In the first, regular individuals may choose to use a body part as a club, the source of that body part depending heavily on the setting:

Alternatively, characters gifted with Super Strength may eschew the dismemberment completely and use an entire body as a weapon. This is also an alternative for mechs of the appropriate size in relation to the body being used. Of course, you'd have to be nuts (or really, REALLY trusting / durable) to let anyone do that to you, which is why most "weapons" are either dead or unconscious — or will be by the time you're done. May be combined with Metronomic Man Mashing if you're attacking both the person you're hitting and the person you're hitting with.

Shamu Fu is a Sub-Trope where the body in question is a fish or some other marine animal. The Fastball Special is another subtrope where a powerhouse throws a (usually) willing partner at a target, at which point the partner's unique abilities come into play. For people who club others with bodies as their standard weapon see Improbable Weapon User. For the un-improvised version see Equippable Ally. Stop Hitting Yourself is a variant when you use your opponent's limb (severed or not) to hurt them. For using a body to protect yourself rather than hurt your enemy, see Human Shield.

For the video game variant that involves throwing enemies at other enemies, check out Throw the Mook at Them.

Has nothing to do with a certain general or Human Weapon.

Crump fires the audience at Mario from his cannon.

Crump fires the audience at Mario from his cannon.