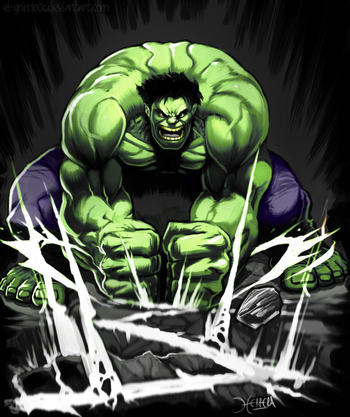 Don't make him angry. You won't like him when he's angry.
Image

. Used with permission.
"When I try to remember, everything goes by too fast. I had it by the neck. It pulled Jenna toward its open mouth. I squeezed hard... pulled... The kids say I tore the thing's head off, just ripped it right out with all the flesh and muscle and whatever else hanging in tatters."
— Mary Jo Miller, Californian soccer mom, World War Z
Advertisement:

One of the worst things you can ever do with a hero is to do something that gets them well and truly furious, because rage makes good guys unbeatable. They will go into a frenzy and become stronger, faster, braver, more agile and more indestructible than they've ever been, and they will annihilate you. This holds particularly true if the character in question is generally meek and feeble. Often indicated with Angry Eyebrows in animation. Caution must be employed by the character, since such tantrums can sometimes lead to a Heroic BSoD.

Used widely in shonen anime. Perhaps because the young male demographic likes to see fast and brutal retribution against enemies who most likely brought it on themselves.

Sometimes referred to gaining Heroic Resolve, particularly if it's in response to a threat against somebody or something that the hero cares about. This is a common result of pressing the character's Berserk Button, and especially occurs if a nice person is pushed a little too far. They might cry but won't stop their attacks. Characters in the grip of an Unstoppable Rage are prone to a Foe-Tossing Charge. They might Kick Them While They Are Down without realizing that they are doing it.

For the quantum leap in badassery achieved without an emotional overflow, see Let's Get Dangerous!. In videogames, this is often a Limit Break, or a 11th-Hour Superpower.

However, there is always the Subversion where a character ends up Blinded by Rage, where making them angry usually causes them to lose focus, make poor decisions and fall victim to Untouchable Until Tagged. Interestingly enough, this case usually happens to villains. Unless they are a video game enemy.

Compare with Superpowered Evil Side. See also Rage-Breaking Point and Rant-Inducing Slight, where this is set off by a multitude of things piling up until a final event proves to be the last straw. The Power of Hate is a similar concept, but focused on hate instead of simply fury.

Contrast with Tranquil Fury, often preceded by a Death Glare or Dull Eyes of Unhappiness. May be instilled in Actual Pacifists with Teach Him Anger. A character who lives by this and counts on it may be The Berserker. A Roaring Rampage of Revenge (or its smaller, arguably more spontaneous counterpart, Extreme Mêlée Revenge) may include this.

". Literal translation? "An act of supreme excellence". Yes, seriously. Even more surprising is the longstanding association with angsty and broadly appealing characters like Achilles.