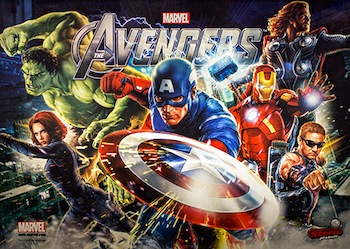 The Avengers is a Physical Pinball Table designed by George Gomez and released by Stern Pinball in 2012. Based on the blockbuster movie, the game requires the player to recruit the six members of the team, test their mettle against each other, then lead them to victory against the Asgardian trickster Loki in a Battle for the Earth. Use the Tesseract to build up cosmic power and raise your score, but watch out for the Hulk, as his short temper and flailing fists make things rather unpredictable.

The pinball table was released in four different variations, including a Premium Edition with expanded rules and an all-green "Hulk" edition.

In 2013, Stern Pinball produced a home version of the game, the second in their line of "The Pin" consumer tables. As a redecorated version of Transformers: The Pin, The Avengers: The Pin is an In Name Only version of The Avengers that shares only the original's theme and artwork.

Not to be confused with The Avengers (Zen Studios), a Digital Pinball Table by Zen Studios that's part of Zen Pinball, or Stern's later game Avengers: Infinity Quest.