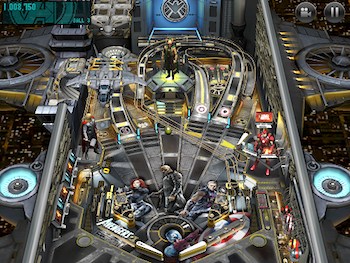 For the Physical Pinball Table by Stern, click here.

The Avengers is a Digital Pinball Table by Zen Studios, released in 2012 as part of a DLC pinball bundle called "Avengers Chronicles".

This pinball is a tie-in to the blockbuster superhero movie of 2012; specifically, it is based on the movie's second act, with Loki causing mischief aboard the SHIELD Helicarrier. The Avengers wish to interrogate Loki to find out what his plans are, but along the way they must deal with a damaging attack on the carrier, Loki's doppelgängers, a fight between Thor and the Hulk, and more. If the player manages to Assemble the team, a four-ball multiball mode begins, providing opportunities to rack up additional points and extra balls.

This pinball table is available for download on various Zen Pinball and Pinball FX games.