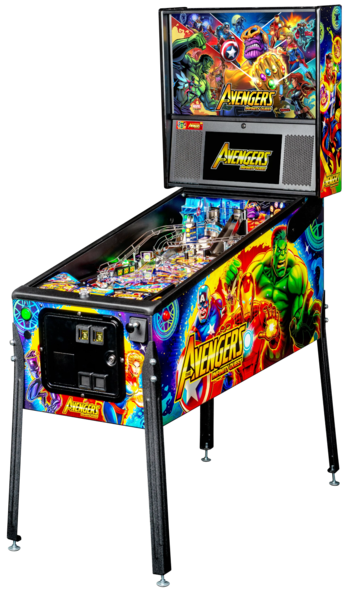 The Pro model.
"This is a simple gem heist. Grab the gem, and get out."
— Black Widow
Advertisement:

Avengers: Infinity Quest is a physical pinball table released in September of 2020 by Stern. Designed by Keith Elwin and featuring artwork by Jeremy "Zombie Yeti" Packer, the game is based on various characters from the Marvel Universe (unsurprisingly focusing on members of The Avengers).

The game's story begins with the Black Order having successfully retrieved the six Infinity Gems and given them to their master, Thanos. The Avengers set out to travel back in time through one of Doctor Strange's portals and take the Gems before the Order can. The player's success in these Gem Quests has a significant impact on the game: if they win, they place the gem on a specific shot that provides a game-long perk, while if they lose, Thanos gets the Gem and uses it against them in the final battle.

Before they can fight Thanos, however, the player needs both the Gems and six primary Avengers – Iron Man, Thor, the Hulk, Black Widow, Black Panther, and Captain America – in order to access a succession of mini-wizard modes. Getting through all of these (which include tasks like retrieving the Soul Gem from the astral plane and fighting off the entire Black Order) is a tough order, but Thor and Iron Man's multiballs can help make it easier. Throughout the game, trophies are also made available for achieving certain milestones. Collecting enough of them leads to the true Wizard Mode, "Trophy Mania".

The game comes in three varieties: the standard "Pro", higher-tier "Premium", and deluxe "Limited" editions. Every version features a spinning "Eye of Agamotto" kinetic disc and an Avengers Tower on the playfield that can hold balls in mid-air. The latter two upgrade the Eye to open up and function as a scoop for capturing balls; they also feature a subway that can hold them underneath the playfield, an inverse gravity wireform ramp tied to Captain Marvel, a vertical up-kicker, and a sculpted Infinity Gauntlet with "gems" that can light up.