Opening a Can of Clones 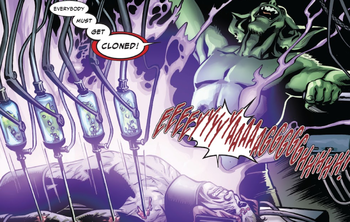 "If anything and everything in a story can be theoretically altered with absolutely no in-universe constraints whatsoever—bound only to the whims of the writers themselves—then why does anything that happens in the story matter?"
— State of the Arc Podcast, "The Problem with Time-Travel

In Speculative Fiction, time-travel, shapeshifters, robot duplicates, alternate universes and clones are exciting and can add a layer of ambiguity and suspense to a story. They can fill characters and viewers with paranoia and make for great shocking revelations. However, they can also completely derail said story and kill all drama when fans get lost in the forest of Epileptic Trees. The problem stems from the possibility that: if clones, shapeshifters, time-travelers or body-hopping aliens can make and unmake plot points at whim, how can viewers be sure that a given story element is permanent?

The issue here is similar to how a setting wherein Death Is Cheap takes away dramatic punch from future character deaths. By allowing for the existence of these duplicates and/or time-travel shenanigans, the author essentially has a built-in Reset Button with giant neon lettering which says: "Wanna bet this dramatic revelation, death or plot twist is here to stay?" These fears can be confirmed if an author starts retconning events or casually undoing any narrative changes using these tropes.

All this is essentially just a way of saying: "Nothing is at stake if there is no guarantee of consequences."

The ur-trope of the Nineties, not just a popular gimmick in mainstream films (see Alien: Resurrection and The 6th Day), but in comic books (The Death of Superman), television (The X-Files) and video games (Metal Gear Solid) as well. Because clones and their usage were so obligatory (and over-saturated) for over a decade, they are regarded as something of a cop-out by the mainstream public. It's not that clones in themselves are bad, but stories involving them are so formulaic that any suspense grinds to a halt: there's never just one clone but several, and a story with clones can never fully dispel rumors that the lead survivor is, in fact, a clone. Likewise, most stories which involve time-travel (with the most obvious exception of Stable Time Loop varieties) can never fully dissuade viewers from believing that any past, present, or future plot points can or will be RetGoned at some point, and most stories wherein one or more characters can come Back from the Dead can never fully discourage viewers from suspecting that future character deaths won't be permanent.

It's worth noting that—often times—this trope is not so much the result of a sincere desire to enrich a story as it is the result of an author trying too hard to invent some excuse to keep a franchise going. You see, while the Second Law of Metafictional Thermodynamics dictates that writers must repeatedly search for new conflicts to contrive, new characters to kill off and new environments to destroy, the reality is that writers cannot destroy all of their fictional creations without ending/ruining the story. Opening A Can of Clones may thus be seen as the logical result of an author having already destroyed so much of their fictional creations that the only way they can keep the story going is to start undoing previous plot points and beginning anew from there. The problem however is that—while this does result in the author once again having more fictional materials to blow up and more new storylines to contrive—it also results in a growing number of fans becoming increasingly apathetic towards the franchise as a whole, as the loss of in-universe permanence instills in them a sense that nothing will be of lasting consequence anymore—hence a common yet unspoken belief amongst many fiction fans being: "Once you start bringing characters back from the dead and/or adding time-travel/alternate universes to a story, things can only go downhill from there."

A few things that may cause this reaction:

A few ways to avoid this reaction:

Related to The Multiverse and the Second Law of Metafictional Thermodynamics.