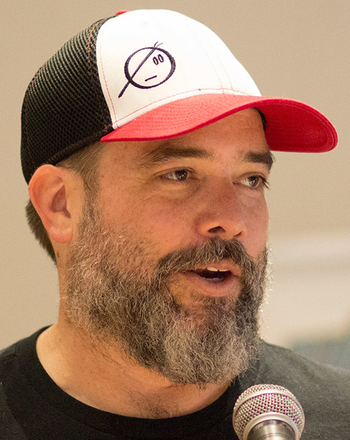 Elwin at the 2019 Pinball Expo.
Keith Elwin is a professional pinball player turned designer from California. He started as an operator and technician and made a name for himself as an exceptionally skilled player in the competitive scene, frequently making it to the very top of the PAPA rankings and winning many tournaments. (This is part of why Star Wars (Stern) uses his initials, "KME", as the default for the top of the high score list.) He also created a homebrew pinball table based on Archer in 2015, bringing it to 2016's Pinball Expo for attendees to play. This caught Stern Pinball's attention, leading to the company hiring him – fulfilling his lifelong dream of becoming a pinball designer in the process. His first game, Iron Maiden: Legacy of the Beast, is a reworked version of his Archer design featuring a new license.
Advertisement:

In addition to designing the actual layout of each table, he also comes up with their rules – unlike many other designers, who have other people create rules for their games. (He also cameos as an Easter Egg in some of them.)