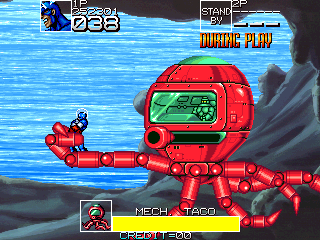 "Tako" is Japanese for "octopus". This is not robotic Mexican food.
Advertisement:

A Beat 'em Up game by Data East based on Marvel Comics characters. It was originally released for arcades in 1991, where up to four players could play simultaneously as Captain America, Iron Man, Hawkeye, and The Vision.

The somewhat different NES version was a Platform Game in which one player controlled Captain America and Hawkeye alternately, traveling across America to rescue Iron Man and the Vision from captivity.