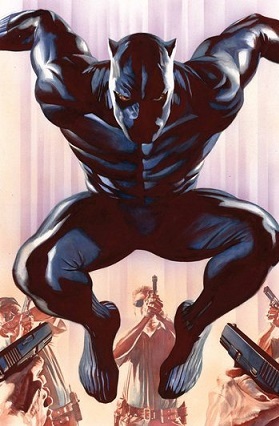 WAKANDA FOREVER!!!
"The thing people keep forgetting about my client is, well, he's a KING. He's not just another nutjob in tights. He's a full-bird monarch from one of the most technologically advanced nations on the planet. And, somehow, we keep forgetting that."
— Everett K. Ross, about King T'Challa.
Advertisement:

Marvel's Black Panther was created in 1966, before even the formation of the Black Panther party, by Stan Lee and Jack Kirby and debuting in the pages of Fantastic Four. He is one of the earliest and most popular black superheroes in American comics.

For generations, Wakanda has been ruled by the Black Panther Kings. All was well until the treacherous Ulysses Klaw discovered the infinite potential of its large deposits of the mysterious vibranium ore, which is found nowhere else on Earth. Klaw then tries to lead a band of invaders to overtake the country and kills King T'Chaka in front of his son T'Challa. The grieving young T'Challa, however, wasted no time attacking and maiming Klaw soon afterward, forcing Klaw and his forces to retreat.

Young T'Challa would later be educated and trained abroad, before finally attaining the full title of Black Panther. Soon afterward he invited the Fantastic Four to Wakanda to see if they were worthy of being allies against the now sound-powered Klaw and to prove himself. After that adventure, he soon began to meet various individuals within the Marvel Universe, eventually becoming a member of The Avengers, along with having his own solo adventures.

T'Challa made major headlines with his marriage to popular X-Men character Storm, along with his sister Shuri taking over the mantle of Black Panther. He also took on the role of protector of the Hell's Kitchen area from Daredevil a.k.a. Matt Murdock, the original Man Without Fear and his comic book numbering and subtitle. Until Daredevil got another ongoing series, Black Panther's series was then subtitled The World's Most Dangerous Man Alive! until it was cancelled. Following the Marvel NOW! relaunch of several Marvel comics, Black Panther appeared in the third volume of New Avengers as a member of the Illuminati.

After Secret Wars (2015), T'Challa was a prominent component of the All-New, All-Different Marvel initiative, featuring in The Ultimates—a new take on the Ultimate Comics team title set in the main Marvel universe— as well as a new ongoing series (volume 6) by Ta-Nehisi Coates and Brian Stelfreeze.

After appearing in a number of animated series (including his own animated mini-series on BET, co-created by Reginald Hudlin) Panther made his movie debut in the Marvel Cinematic Universe feature Captain America: Civil War, as a lead-in to Black Panther. He was played by Chadwick Boseman. As of Jan 2022, the character's future in the setting is uncertain due to Boseman's untimely passing in 2020, although Wakanda-related projects are very much in the cards.

On July 23, 2016, Marvel revealed that Roxane Gay and Ta-Nehisi Coates were selected to co-write a Black Panther spin-off comic, World of Wakanda. World of Wakanda focused on Ayo and Aneka, the Dora Milaje warriors who became the Midnight Angels.

In 2018, the initial Coates & Stelfreeze series ended after 23 issues and Coates and artist Daniel Acuña started an new, renumbered, ongoing Black Panther series (volume 7) which was devoted to a single long arc, The Intergalactic Empire of Wakanda.

The second Coates Black Panther series ended in 2021, after 25 issues, and was replaced later that year by a new series of the same name, written by John Ridley and illustrated by Juann Cabal.