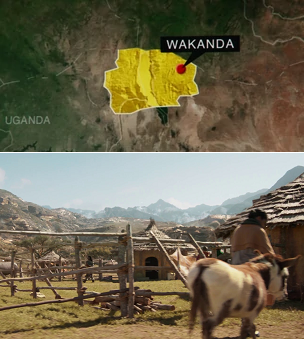 Wait until you get to the capital, though.
Ulysses Klaue: What do you actually know about Wakanda?
Agent Ross: Umm ... shepherds, textiles, cool outfits?
— Black Panther
Advertisement:

A Bulungi is a fictional little country nestled somewhere in sub-Saharan Africa. If used as a setting, almost always a thick jungle or parched Savannah, even though the southern region is more temperate.

Bulungis are often populated by a mix of white and black residents, the former of whom usually speak with vaguely British and/or Afrikaner accents, and the latter will probably speak Pidgin Englishnote A creole dialect of English mixed with local African languages, which was written for the first time in 2017 when BBC launched a Nigerian Pidgin

version of their site, though fictional examples will usually just amount to broken English with African-like words in between. The country's name is usually composed of simple syllables that are stereotypically "African"-sounding.

In many cases, the Bulungi is in the midst of the transition process from a People's Republic of Tyranny or military dictatorship to a more democratic type of rule, though this might not be going well for them. If there is a dictator, expect him to have Majored in Western Hypocrisy. In particularly incorrect works, the entirety of Africa may be generalized as a Bulungi.