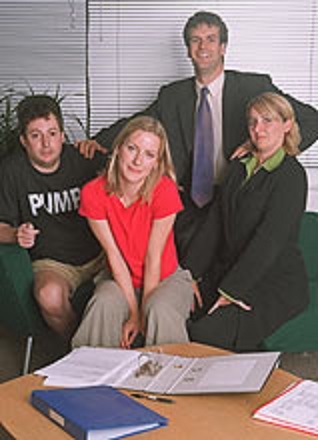 Think the Unthinkable was a BBC Radio 4 sitcom written by James Cary which aired for four series from 2001 to 2005 and followed the fortunes of Unthinkable Solutions, a team of inept management consultants whose advice to the companies foolish enough to hire them nearly always left them worse off than they were before.

The personnel of Unthinkable Solutions include the team leader, Wide-Eyed Idealist Ryan Packer (Marcus Brigstocke); his second-in-command Sophie Stott (Emma Kennedy in Series 1-2, Beth Chalmers in Series 3-4), the only sane woman (when she isn't giving in to her violent temper); Granola Girl Daisy De Vere (Catherine Shepherd), who insists on carrying her fondness for New Age trends into the ideas for the corporations that hire them; and IT expert Owen (David Mitchell), Abhorrent Admirer to Sophie and openly critical of almost all forms of technology, even ones he installed himself.