"Hey, man, DJ Hippie on the air, bringing you the best— and possibly not the best— of the classic vinyl era: for when you're in that "special" kind of mood... Far out, man. Far out."
— The show's intro 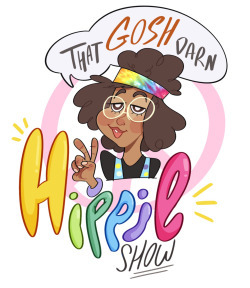 That Gosh Darn Hippie Show is a nationally syndicated Classic Rock show originally hosted on WDBK until a Channel Hop to WRGG in April 2018. It plays songs released between 1950 and 1989note or covers/parodies of songs released during that time period, with a special focus on obscure tracks and novelty/comedy records. Its host, "DJ Hippie" (real name Kiki Willows), has been running the show since September 2014. She is joined on the production team by Bri Norton (since 2014), Steven Grimes (since 2017), and Hayley Rose (since 2018).

. Steven and Hayley may also be found on Real-Time Fandub and SnubDub