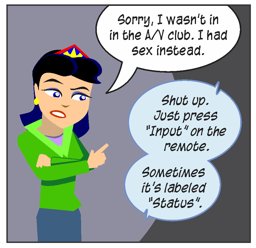 Her arch nemesis is such a geek.

Hardison: Looks like an ordinary cell phone, right? It's not, man. It's a metal detector. See, it uses pulse-induction technology that sends out a current that generates a magnetic field, and then... are you even listening?
Eliot: Yeah.
Hardison: Well, what'd I say?
Eliot: You were explaining how you're still a virgin?
— Leverage
Advertisement:

If you are a nerd and/or geek, then according to damn near every work of fiction in existence, you have never gotten laid, very likely haven't gotten to first base, may have never ever stepped up to bat — and quite possibly have never so much as wandered within a mile of the ballpark.

Now, this does have some real life basis, in that some nerds and geeks do lack some social skills, and take up unusual interests as a way to fill the gap in their lives (or, more unfortunately, fail to develop social skills because of said interests), or simply find them more interesting than exercising social skills. Though some might just be asexual.

This trope can apply to female nerds as easily as male nerds, but thanks to the Double Standard, the males are far more likely to find unwholesome outlets for their unexpressed sexuality, virginity notwithstanding. Also, because males are expected to make the first move, female nerds are not at a disadvantage due to shyness or social ineptness. In fact, male nerds have just as much chance of being the Casanova Wannabe as any other type of male character. Some males (and a rare female or two) may try to deny their virginity, out of fear of losing face, but thanks to their nerdy exteriors, they are unlikely to be believed by other characters, if they even have the social graces to spin a convincing lie in the first place. Another possible reason that female nerds are less likely to be virgins is because All Men Are Perverts and A Man Is Always Eager in Fiction Land, and couldn't care less about what a woman's hobbies are as long as she's letting him have sex with her. Women on the other hand are often depicted as far more discriminating and will reject a partner whose hobbies aren't "cool" enough. Hence the use of terms like "girl repellent" (or the less G-Rated version "pussy repellent") to describe nerdy things.

There is also a general perception that a nerd's level of nerdiness is inversely proportional to their chances of getting laid, which is a big reason that Even Nerds Have Standards. It also means that some nerds will deny at least some aspects of their nerdiness. The reverse belief also exists. Instead of believing that nerdy hobbies prevent you from getting laid, some people believe that the only reason people have nerdy hobbies is because they can't get laid to begin with, are miserable because of this, and therefore seek a form of escapism from said misery (most likely because that's what they do themselves, so they assume everyone else does too).

In non-mainstream works, this trope shows up less frequently, although some cases are deliberate aversions and some are just Author Appeal.

If the nerds are the main characters, there is a high chance they won't be virgins by the end of the movie/book/first season of the show, because virginity is a tragic flaw and heroes always overcome their flaws. Make that a very, very high chance if said heroes are male.

Note this doesn't prevent a Nerdgasm.

Compare You Need to Get Laid.