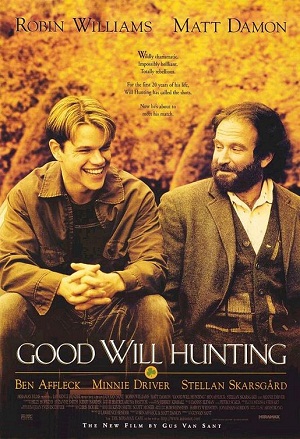 Good Will Hunting is a 1997 drama film directed by Gus Van Sant, written by (and starring) Matt Damon and Ben Affleck and also starring Robin Williams.

Set in Boston, Massachusetts, the film tells the story of Will Hunting (Damon), a troubled Irish-Catholic young man who is gifted with extraordinary mathematical skills (as well as being a prodigy and an autodidact), but works in a menial janitorial job at the Massachusetts Institute of Technology in Cambridge. Prone to violence and extremely loyal to his friends Chuckie (Affleck), Morgan (Casey Affleck) and Billy (Cole Hauser), Will has pushed away everyone else who's tried to get close to him because of his abusive past and introverted personality.

After solving a complex mathematical equation at the campus, Will is discovered by Professor Gerald Lambeau (Stellan Skarsgård), a Fields Medal-winning mathematician who sees a lot of potential in Hunting, and sends him to psychiatrist Sean Maguire (Williams), while at the same time, Hunting strikes up a relationship with the beautiful Skylar (Minnie Driver), who is also confronting her own personal problems. Will must learn to overcome his deep fear of abandonment (with Maguire's help) in order to learn how to trust and love the people who care about him.

See also Finding Forrester, another Gus Van Sant film about the discovery (and self-discovery) of an intelligent young man.

Skylar's attempt to invoke this trope does not go the way she wants.

Skylar's attempt to invoke this trope does not go the way she wants.