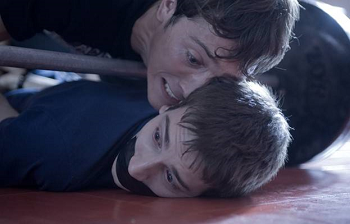 "Who are these kids!? Jeffrey Dahmer's bastards!?"
— Bennett the Sage on Lucy's bullies, Elfen Lied
Advertisement:

Often in media, The Bully is portrayed as a typical Jerkass whose biggest threat to their victim is a wedgie or fist in the face. Aside from that, they are mostly harmless in the grand scheme of things. Bully Brutality takes the typical bully up to eleven by having him do things that could actually seriously hurt or even kill their victim, though the bully may or may not actually want to commit murder. Of course, knowingly using violence that can result in serious injury or death isn't any better than premeditated murder. Where the typical bully just wants to give their victim a black eye, the brutal bully wants to beat them to a bloody pulp, if not even worse. The fact that the bully is capable of inflicting such harm is usually lampshaded by the characters. It becomes clear that these bullies have no limits. It also becomes clear that because of that, they have crossed all lines, which makes it a great example of crossing the Moral Event Horizon.

Do not confuse this with cases where bullying has led to the victim committing suicide; that's just a specific case of Driven to Suicide. This trope is where the bullying itself has reached levels where the bully has committed manslaughter, or come close to it by landing the victim in hospital or leaving them permanently disabled.

Related to Kids Are Cruel, Teens Are Monsters, and Bullied into Depression. Compare No-Holds-Barred Beatdown, a common weapon in the bully's arsenal for this trope. Contrast with School Bullying Is Harmless. Sadly, this is Truth in Television; some Real Life bulles have been known to brutally beat, maim, disable, or even kill their victims. That being said, No Real Life Examples, Please!